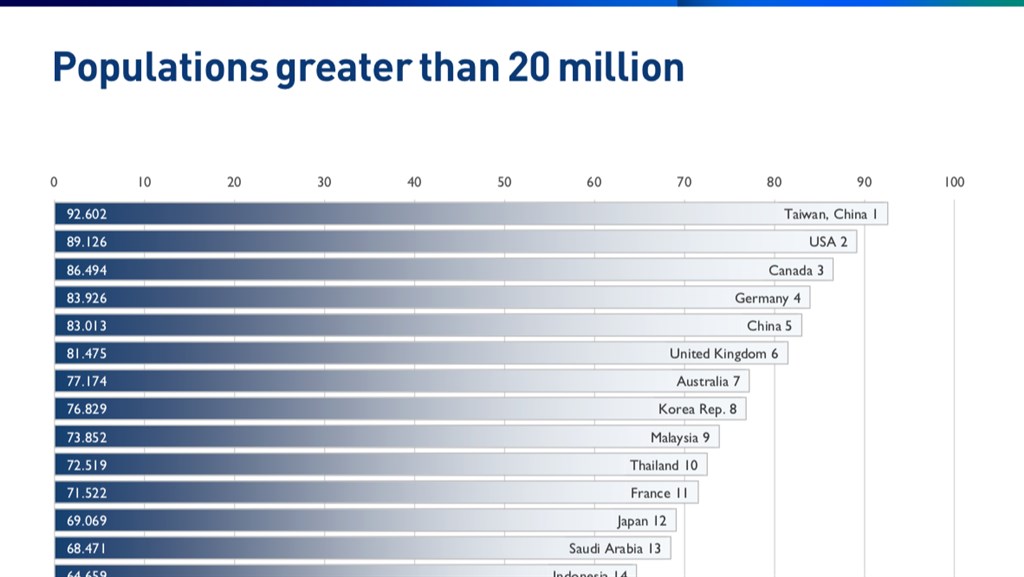 Taiwan has moved up three spots to eighth place in the latest world competitiveness rankings and first among countries with populations over 20 million, according to a yearbook released Thursday by the International Institute for Management Development (IMD).

Taiwan’s eighth place ranking, its highest in the World Competitiveness Yearbook since 2013, was based on improvements in all four indicators used to compile the rankings, the IMD said.

Among the 64 countries and regions on the list, Taiwan ranked sixth in 2021 in the area of economic performance, eighth in government efficiency, seventh in business efficiency, and 14th in infrastructure, the IMD said.

According to the IMD, the challenges Taiwan faces this year include promoting technology innovation, deepening international cooperation, and enhancing domestic and foreign investment to seize opportunities amid the post-pandemic global recovery.

Switzerland was at the top of this year’s rankings, followed by Sweden, Denmark, the Netherlands, Singapore, Norway, Hong Kong, Taiwan, the United Arab Emirates and the United States.

Among countries and regions with a population over 20 million, Taiwan ranked first, ahead of the U.S., Canada, Germany and China.

Economies that did well in the rankings this year had diverse economic activity and supportive public policies, which enabled them to combat the challenges brought by the COVID-19 pandemic, the IMD said.